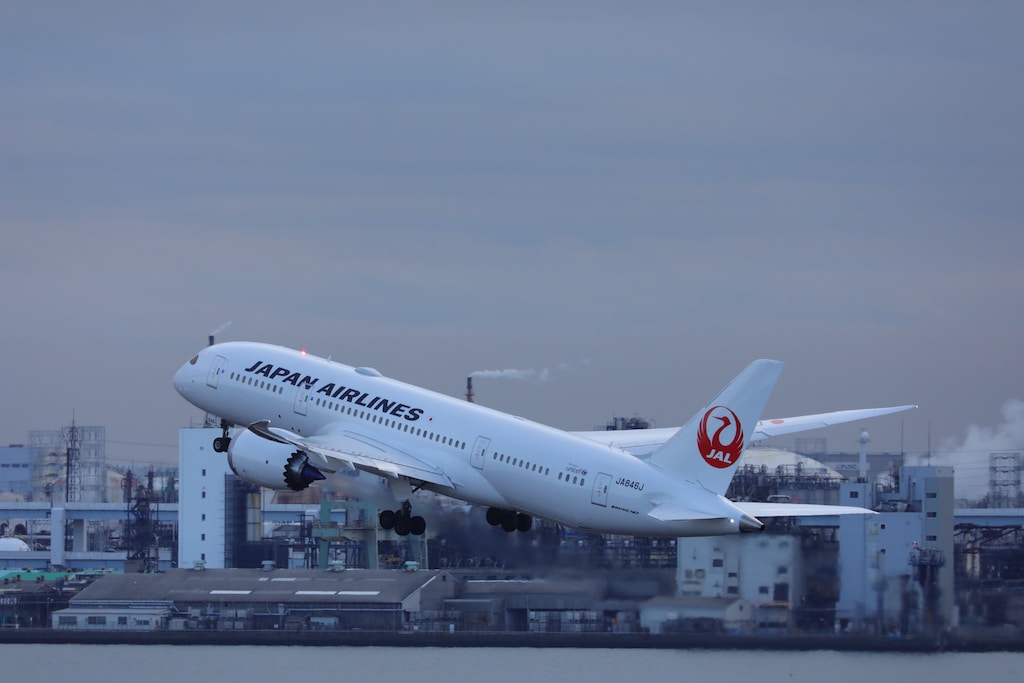 Our friend, Jez, arrived in Japan today, so we agreed to travel out to Haneda Airport to meet him. Fortunately, Haneda is not as far from where we are staying as Narita is, so we were able to leave our hotel at 8am.

The weather had been forecast to be sunny, so we didn’t need to wear jumpers when we left the hotel, and we certainly didn’t need them on the train, as it is always warm there. After a change of line, we got onto the monorail that goes out to Haneda. It was an attractive journey with quite a lot of things for us to look at.

We were a little late arriving at Haneda (about 9:10am), so we decided to have a look around the arrivals hall, to see whether we could spot Jez. We had only walked about 100m when we spied Jez. The airport is totally different from Narita, Heathrow, Gatwick and other large airports. I was amazed by how quiet and empty it seemed.

Jez had already dropped off his bike box, so we decided to queue to sort out his Japan Rail ticket, before doing anything else. The queue was much shorter than at Narita, so it didn’t take long. Jez then needed to collect a parcel and sort out his wifi, so we went back upstairs. Unfortunately, the collection point was at Terminal 1, so we agreed to stay with Jez’s bags whilst he popped to the other terminal. This was fine as there was free wifi at the airport 🙂

After eying up some traditional fish restaurants, we settled on Mos Burger. I think this is a Japanese burger chain as I’m sure my friend Shizuka said she used to work in one.

I spent a bit of time trying to decipher the menu and worked out that there was a vege burger option. When we went in, the sales assistant produced a menu in English. I was correct – it was an avocado soy burger. Delicious! Stu and I ordered a portion of fries to share and a glass of Pepsi each. It was a little early for lunch, but as we hadn’t had breakfast and Jez was hungry, it was a good plan.

After eating, we went back to the monorail station, where Jez decided to make his first purchase from a Japanese vending machine. He selected a bottle of pocari sweat and seemed genuinely excited about the experience.

The helpful signs showed that although it was only 2 minutes until the next train if we waited 5 minutes, we could get a train that would take us straight to Akihabara. We were also informed by some signs on the platform that there was a good location from which to take photographs, so we walked to the end of the platform for Jez’s monorail photo opportunity.

There were plenty of seats on the train, but we decided to stand so that Jez could hold onto his bike.

Sorting out our ticket reservations in Akihabara

When we got to Akihabara, we made our way to the JR ticket office. As Jez is very organised, he had written down all of the ticket reservations that we needed to make. We just passed his spreadsheet over to the sales assistant who was able to process all of the bookings.

The lights outside of the station had caught Jez’s eye, so we headed out to see ‘Electric City’, before wandering around trying to find the Tokyo Metro station.

After a little while, I went to the information desk and was able to ask in Japanese for the metro station and I understood the instructions that I was given. It seems quite tedious in a language class to spend time asking directions and having to learn words such as left, right, bridge, traffic lights, turn, go straight ahead etc, but I am now relieved that I was paying attention in class.

After another short ride, we made it to the stop nearest Jez’s accommodation – a hostel called K’s. This is where we experienced true a Japanese address, as we only knew which ‘chome’ the building was in. It took a bit of searching, but a kind man saw us looking and pointed in the right direction.

Whilst Jez dropped his stuff off, we indulged ourselves with some more free wifi and a small cup of tea each. The staff at the hostel are well-travelled young Japanese people, so they all spoke good English. They gave us a map, and we decided to set off in the direction of a temple.

This whole process had taken several hours, so when we saw a 7-11, we decided to stop and buy some lunch to take with us. I selected a finger roll filled with cheese and sweetcorn, some rice wrapped in seaweed and a banana, along with a bottle of lemon soda.

We continued walking along the street until we saw the gates of a temple up ahead. I had thought we were heading towards a temple that we had seen earlier this week. As we got closer, I realised that it was one we had visited at night last time we were here (6 years ago).

Whilst Jez was taking some photographs, Stuart and I were approached by a television crew. They wanted to interview us about the cost of accommodation in Tokyo. Stu has been the one to organise the trip. I haven’t been too involved in looking at the prices, but as far as I’m aware, the hotels here are not as expensive as many in London. The hostels are very reasonably priced at about £20 a night.

We crossed the road and were immediately greeted by a barrage of sound and colour. A group of girls were walking past in kimonos, so a tour guide asked them if they would stop and pose for some photographs. They politely agreed, so we took a few shots.

The path leading up to the temple is lined with small shops selling omiyage (souvenirs), so it was very busy. There were quite a few women (and some men) walking around in traditional outfits. I think many of them delight in being the centre of attention as they seemed happy to pose for photos, although it seemed strange to see a couple of young years wearing such traditional attire pull out a selfie stick and start snapping away.

Before getting too close to the temple, we decided to sit on a rock and eat our lunch. The roll was quite nice, but my rice snack had fish in it (I did wonder!), so I didn’t eat it. The banana was delicious. I have missed eating fruit and hope I can find a delicious apple soon.

The temple is spectacular. It is located next to an enormous pagoda that is truly breathtaking. Again, this is all juxtaposed against the new addition to the skyline, the Tokyo Sky Tree. We took many, many photos, before paying a small fee to look at an exhibition of traditional Japanese paintings and woodcuts. The entrance fee also allowed us to walk around the monks’ garden. It seemed tranquil after the bustle around the temple.

An elderly woman (who may have been a nun) was offering small cups of green tea. We accepted before continuing our stroll around the garden.

By this stage, Jez was starting to flag, so we walked back to his hostel, before walking back to our hotel.

Going to and fro

After repacking all of our belongings, we returned to Jez’s hostel. The staff had recommended a local Indian restaurant as being a place where we could find vegetarian food. We set off in search of it.

Along the way, a group of small boys, all wearing gis, passed us. We had noticed a dojo near to Jez’s hostel, so they must have been to a class there. I was surprised by two things. Firstly, we were always led to believe that it is inappropriate for a gi to be worn outside a dojo. Secondly, in England, no parent would allow a child of six or seven years old to walk home. I think it is acceptable here as the roads seem safe and there is such a low crime rate.

After a while, we found the restaurant. It had an enticing aroma and the Indian staff could not only speak Japanese, but they also spoke good English.

Eating a curry in Tokyo

Stuart and Jez ordered a tankard off Asahi beer each and I ordered a coke. They then ordered chicken curry, whilst I ordered a vegetable curry and a Peshwari naan. We had to choose how hot we wanted the food to be on a scale of 0-5. Stu chose 3 and Jez chose 4. I don’t like very hot food, so I chose 2, which turned out to be hotter than I expected. Fortunately, the naan was one of the next that I have ever had. (Peshwari naan is one of my favourite foods).

At that point, Stu and Jez were both tired. We went our separate ways and agreed to meet in the morning at 9am.

To read about this from Jez’s point of view, please check out: Orientation and sightseeing in Tokyo

If you liked this post, why not read more?

I'd love to hear your thoughts... Cancel reply